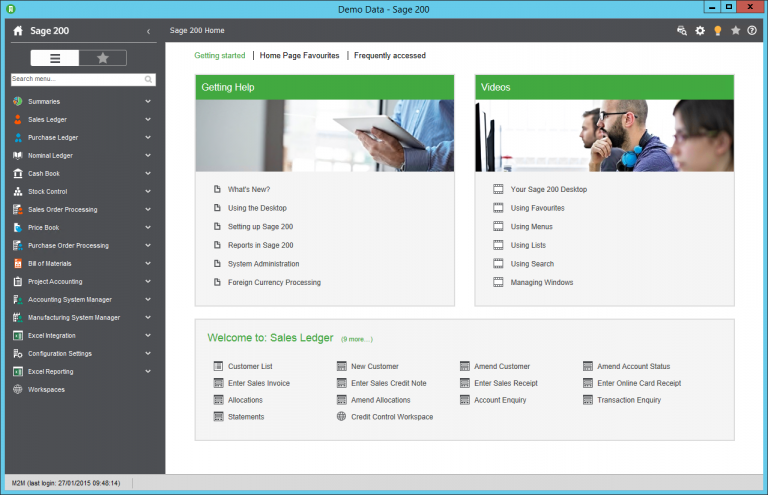 The all new Sage 200 2015 is now available. Here at M2M we are really excited by what has been described as the most significant Sage release in years, maybe even since Sage 200 was originally launched in 2007.

Sage 200 2015 has been redesigned with you the user in mind. Sage Business Partners and their customers have played an integral part during all stages of the design and consulting process. It has been bought up to date with a brand new screen design and home page. A new searchable menu, and brand new desktop lists have also been introduced. It is easier to use, easier to navigate and its intuitive nature can even remember what you do on a particular day each week and records where your favourite pages are.

When researching what it was users wanted to see from the all new Sage 200 2015, Speed was a major factor, and I am pleased to report that it doesn’t disappoint. Everything about Sage 200 2015 is faster. It boasts faster start up times, and it is particularly faster when working between two or more companies. The workspaces are also noticeably faster.

There are now more report facilities in Sage 200 than ever before, and an additional excel reporting module which keeps the Sage 200 layout and can even be saved back in Sage after you have used excel.

Throughout this redesign process the Sage Development team has also been investing a lot of time into working on the latest version of Sage CRM 7.3. It fully synchronises with Sage 200 2015, and together they create a powerful business solution that you will find hard to beat.

Discover how Sage’s powerful business management solution could work for your business.

Let’s talk about customising Sage 200 for your unique business processes.

We work with Sage 200 clients in Essex, London, Kent and the Home Counties.