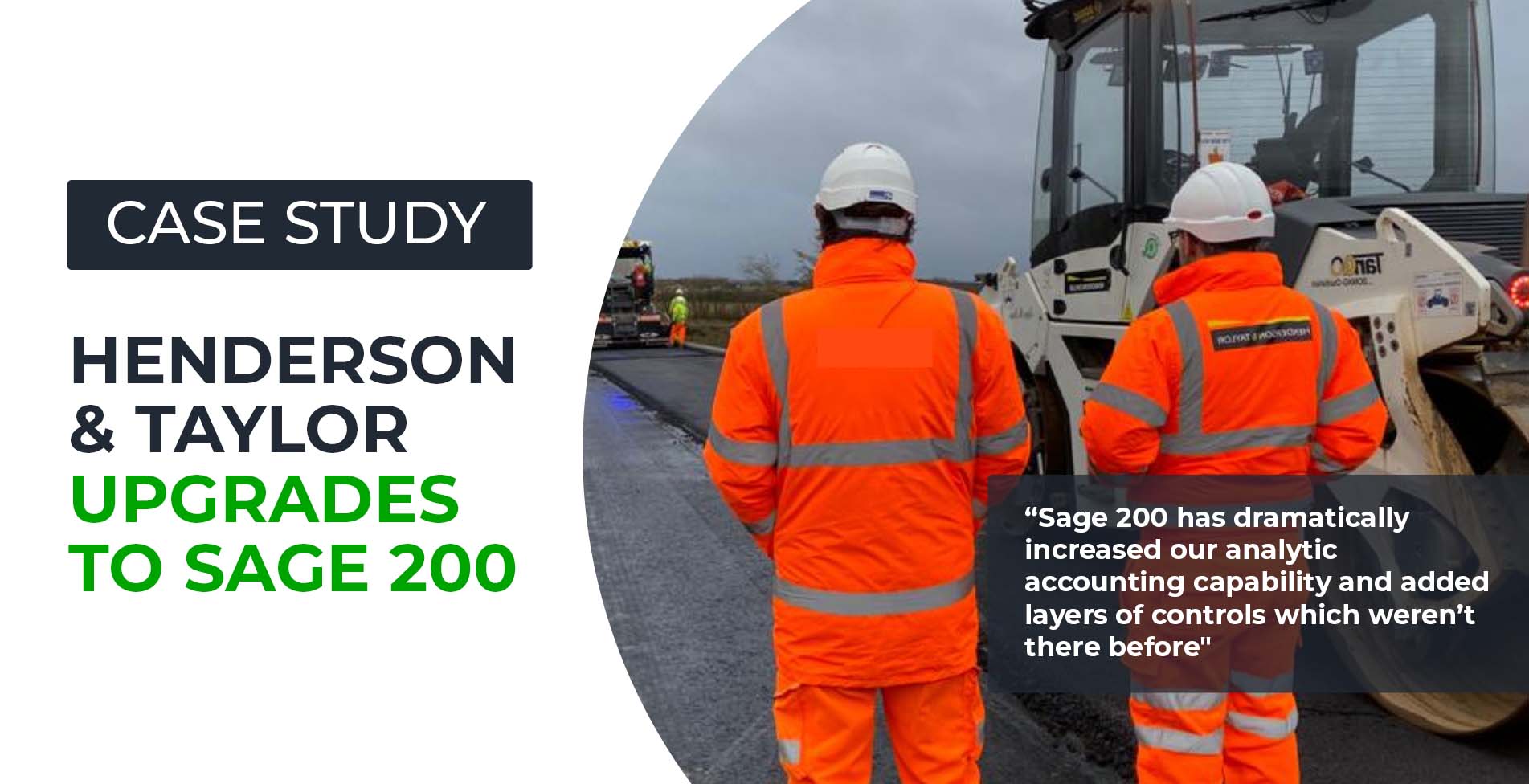 Based in the Essex town of Chadwell St Mary, Henderson & Taylor unites four separate companies under its umbrella. A well-respected name within its field, this group is renowned for delivering quality work in the fields of highways & civil engineering, and invasive weed removal.

Lee Sheldrick joined the group as Head of Finance in 2021 at a time when Henderson & Taylor was experiencing performance issues with Sage 50, which they had outgrown both in terms of its functionality and recommended transaction volumes.

Having successfully overseen several new platform implementations in the past, Lee knew the importance of a measured and methodical approach to identifying a replacement software. So, despite his prior knowledge of Sage 200 from a previous role, he took the opportunity to engage an outside consultant to assist his management team in studying alternative software solutions.

These independent findings soon confirmed Sage 200 to be the best choice due to the ease and speed of migrating from Sage 50 to Sage 200 as well as the significant step forward it represented in terms of system performance and enhanced reporting on the financials of the companies.

M2M Technology was approached to produce a Sage 200 proposal and invited to visit Henderson & Taylor to meet with Lee and the external consultant. Lee found the Sage 200 partners to be personable, easily accessible and flexible in terms of pricing and the scope of the project. M2M were engaged to deliver Sage 200 along with some Sage 200 add-on products for the group. The deciding factor had been when Business Development Director, Rob Hardy demonstrated, within a couple of days, just how smoothly his team could convert a large amount of Sage 50 data onto a sandbox version of Sage 200.

Assuring a smooth migration to Sage 200

One stumbling block to the migration was that several year-ends had not been performed within Sage 50, which meant that more than 350k transactions could not be moved. Well versed in these issues, the M2M support team suggested running these processes on behalf of Henderson & Taylor. Once this had been completed, the migration, which included 2,800 project records, could proceed.

In Lee’s words: “Rob and the M2M support team went over and above what was expected of them, taking full ownership of the project and working proactively throughout the implementation, taking on additional tasks such as running year-end processes themselves.”

The project also included the installation of Sicon Projects, an application for manufacturing and construction companies that is designed specifically for Sage 200 and integrates with purchase ledger, SOP, POP, stock, time recording and works order processing.

Lee described the whole process as extremely well-handled in terms of set up, data migration and configuration. Thanks to the smooth implementation, the upgrade from Sage 50 to Sage 200 has been well received by the Henderson & Tayor staff. Lee is particularly pleased that whereas their previous package was used solely by the finance team, other members of staff such as their Project Managers and Quantity Surveyors are now using Sage 200 for reporting within their own departments.

New layers of control with Sage 200

Henderson & Taylor were impressed by the breadth of expertise offered by the M2M implementation team – not just in terms of the software, but also the knowledge offered by their Sage 200 consultants when it comes to finance, general ledger set up and Sage 200 add-ons such as Sicon. This undoubtedly contributed to the success of this project.

Head of Finance, Lee Sheldrick commented: “Sage 200 has dramatically increased our analytic accounting capability and added layers of controls which weren’t there before. The business is now moving forward with implementing a PO system for the first time and, as Sage 200 is becoming more widely used throughout our organisation, there is a tighter system of checks and balances in place now, along with the ability to measure project performance more easily.”

Lee also acknowledged the ability for Sage 200 to be easily scaled in order to meet the needs of this growing business over the coming years.

With the initial implementation completed, the next phase is to identify the training needs of staff, while continuing to investigate more functionality available within Sage 200. This customised Sage 200 training package delivered by M2M will introduce those who have been most involved in the project with the additional functionality Sage 200 has to offer – especially in terms of reporting.

Additionally, M2M continues to provide ad hoc support and advice on Sage 200 functionality, ensuring the Henderson & Taylor Group gets the most out of its new system for all four of its companies.

Discover how Sage’s powerful business management solution could work for your business.

Let’s talk about customising Sage 200 for your unique business processes.

We work with Sage 200 clients in Essex, London, Kent and the Home Counties.